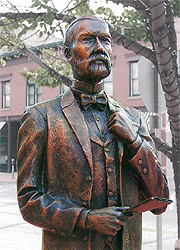 First, to recognize R. F. Pettigrew as a significant  person in the early development of Sioux Falls by sculpting a larger than life-size bronze sculpture of R. F. Pettigrew holding a letter. It would be similar to the small model version currently displayed in 2005 Sculpture Walk and located downtown at the NW corner of 12th Street & Phillips Avenue. The proposed sculpture piece would measure approximately 8 feet tall and would be mounted on an appropriate quartzite pedestal base, for an approximate total height of 12 -14 feet.

Mr. Wolf has emphasized that consideration for the sculpture scale, clothing style, and quartzite base would be given and be appropriate. In the end, the sculpture would be an accurate representation of R. F. Pettigrew, as possible.

The project would be fully funded with private funds. Mr. Wolf would be responsible for all project costs associated with the sculpture production, placement and installation and that the completed sculpture will be donated to the city. There would be no city costs for this project. Mr. Wolf seeks favorable approval from the City Council for the project so that potential funding contributors know that the project is legitimate and accepted by the city.

The R.F. Pettigrew  jury panel’s favorable recommendations were then transmitted to the Visual Arts Commission and Mr. Wolf for the Commission’s meeting held on March 7, 2006.

The sculpture location to be at the terminus of the 5th Street and Phillips Avenue “T” intersection, and centered on the 5th Street alignment.   The sculpture would be placed adjacently east of the existing sidewalk - and south of the pedestrian crossing on an appropriately scaled quartzite base;  and

project monitoring for the R. F. Pettigrew sculpture, by Mr. Darwin Wolf, be conducted by peer reviewers and the Visual Arts Commission prior to and upon completion of the full scale sculpted clay model, and prior to foundry production.