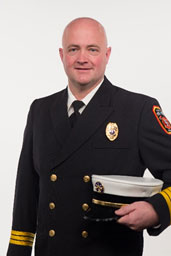 McAreavey brings valuable expertise gained from his tenure thus far with Sioux Falls Fire Rescue (SFFR). He began his career with SFFR in 2002 and served as a firefighter before being promoted to fire apparatus operator in 2008. He was promoted to fire captain in 2009 and has served as battalion chief since 2014, where he coordinates the staffing, training and emergency response of the City’s 12 fire stations. McAreavey has been recognized for his leadership and was named the SFFR Chief Officer of the Year in 2016. He holds a bachelor’s degree from Augustana University and was named to the university’s “Forward Under 40” honorary alumni list.

A collaborative team builder and technological innovator, McAreavey brings experience in a variety of areas within SFFR operations. In his current role, he has collaborated on a county-wide initiative to implement a new software system at the 911 Center that controls and dispatches all emergency services for Minnehaha County. He has also been active in implementing resources from the City’s Civic Analytics group as well as coordinating efforts to improve and implement new technology. Also as battalion chief, he has oversight of health and safety programs and mental health initiatives for SFFR. As part of serving on the SFFR management team, McAreavey has been part of negotiating contracts for the department, including reaching three successful contract negotiations. He has served on the City of Sioux Falls Firefighters’ Pension Fund Board of Trustees since 2011.

McAreavey and his wife Laura have four children. He is actively involved in the community and serves on the West Nidaros Church Master Site Plan Committee and also coaches various youth activities.

“I am honored for this opportunity to serve the community. I love the opportunity to solve problems and collaborate with people,” McAreavey said. “I’m excited to work throughout the City to bring solutions that will foster employee morale and ultimately raise the level of service that Sioux Falls Fire Rescue provides to the community. We have an amazingly talented pool of public servants, and my role in this position will be to share a vision and support our Sioux Falls Fire Rescue team in continuing to provide excellent service to the community.”

McAreavey’s appointment requires the advice and consent of the City Council, which will be presented at the Feb. 2, 2021, Council Meeting.