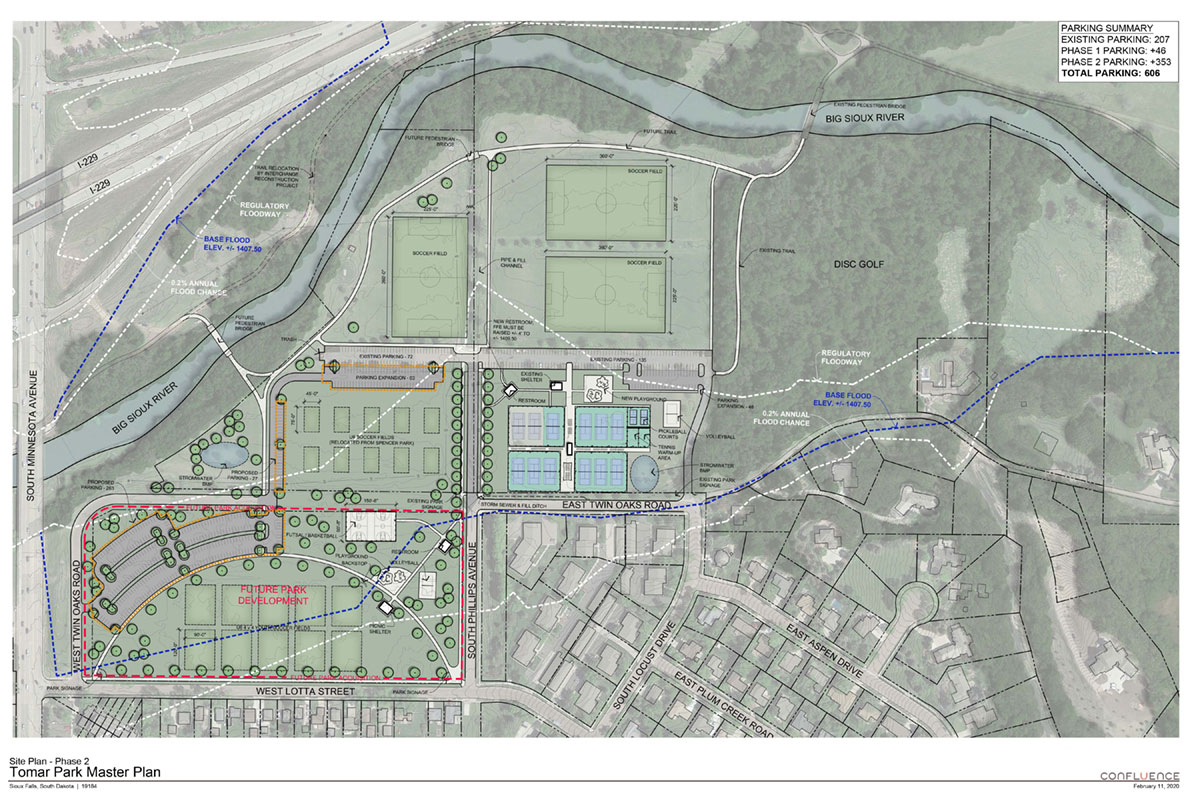 Phase 2 planning looks at the future of Tomar Park and the changes coming in and around the park.  One big factor that has impacted the Tomar neighborhood is the recent flooding in the Rose-Lotta neighborhood.  A voluntary home buy-out program is currently in place to help owners of flooded homes relocate to drier ground over the next 10 years.  The acquired property will eventually be included into a Tomar Park expansion. Another factor that will impact the park and surrounding areas is the future reconstruction of the Minnesota-I-229 interchange.

Phase 2 improvements include a parking lot expansion to relieve on-street parking congestion within the neighborhood, expanded flex fields to help fill a shortage in the community for practice space, storm sewer and entrance road improvements.  A portion of Twin Oaks Road will remain in place as access to new Tomar Park parking lot and reduce pressure on West Lotta Street.  New park amenities will be constructed to better serve the neighborhood including a playground, shelter, restrooms, and basketball court.  Walking trails will make park improvements accessible to the neighborhood and will allow kids to circulate between the fields and playground without a need to cross busy parking lots.  The master plan also considers a future possibility to relocate the main portion of the regional trail to the south side of the Big Sioux River.  The existing trail is confined between Interstate 229 and the river and the need to extend the on-ramp to I-229 may force the main portion of the trail to be relocated.

The City does not currently have any funds budgeted for the Phase 2 improvements.  The timeframe will be dependent on the success of the voluntary home buy-out program as park improvements would not happen until large tracts with no impediments were owned and available for redevelopment.

The master plan was reviewed at a recent public meeting and will be going to the Parks & Recreation Board in April for approval.  Thank you for your interest in the City of Sioux Falls Park System.