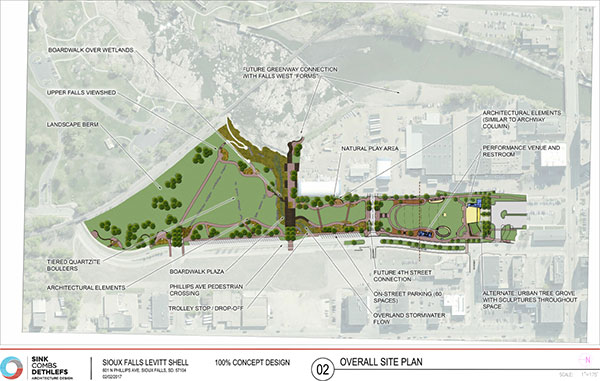 The overall master plan for Falls Park West better connects visitors to Falls Park, Phillips Avenue, and the Big Sioux River, while also providing opportunities for gathering and circulation throughout the space. Improvements to the southern area of the site will create a large outdoor festival grounds to house the many festivals and special events held within Falls Park West. This area will also include the "Levitt at the Falls" performance venue. An outdoor amphitheater, being developed through a multi-party agreement with the City of Sioux Falls, the National Levitt Foundation, and the Friends of Levitt Shell Sioux Falls local non-profit. In addition to the existing festivals and special events conducted in this space, “Levitt at the Falls” will showcase 50 professional performances each year. All of which are free and open to the public. Fourth Street will provide a future east west vehicular connection from the west side of Phillips Avenue to the Sioux Steel property. The boardwalk plaza area is also the location of a proposed mid-block pedestrian crossing across Phillips Avenue, and will serve as a future connection to the Big Sioux River Greenway. From there, tiered turf areas defined by large quartzite boulders will create an informal amphitheater that is focused on the boardwalk plaza area. These tiered quartzite and turf platforms reflect the forms of the upper falls and provide additional viewing opportunities for the falls. Finally, on the very north end of the park, turf mounds will screen the railroad line and provide elevated views looking towards the south end of the park, the river, and downtown Sioux Falls beyond. These mounds are a reflection of the rolling hills consistent with the landforms found in the Big Sioux River basin.