Judee Estates Park is located east of Cliff Avenue on 69th Street, just west of the railroad tracks. The southern half of the parcel is an existing protected wetland. The northern half is flat open space that can be developed. Proposed improvements include a basketball court, play ground, picnic shelter, drinking fountain, and a walking loop for the neighborhood. The proposed walking loop includes a connection to the neighborhood from Northstar Lane, as well as a pathway through the wetland area that eventually connects to 69th Street. There will also be ample, flat open space for recreational activities and neighborhood team practices. An access road and small parking lot are being proposed off Northstar Lane for the primary vehicle access since no major construction can happen in the wetland area. 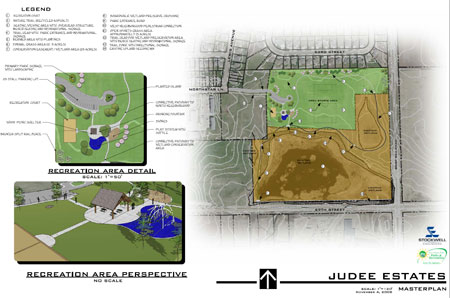 The master plan was reviewed at a public meeting and was approved by the Parks & Recreation Board. The park development is not in the current 5-year Capital Improvement Program. The master plan is being developed to obtain solid budget numbers to program the development in a future year. Thank you for your interest in the City of Sioux Falls Park system.