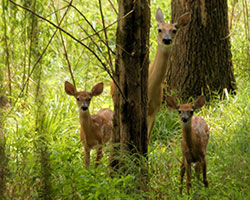 White-tailed deer are naturally found in South Dakota. Within the city, they generally live in wooded areas near water. Deer do well in the city because they have no predators and they have plenty of food. Deer feed on many types of plants, many of which are garden or landscaping plants. Some deer live in Sioux Falls throughout the year, and some migrate into the city during the winter after the crops have been harvested. An adult doe (mother deer) usually has two fawns every year if she has adequate food and water. Deer are a game animal in South Dakota so they are managed by the jurisdiction of the South Dakota Game, Fish and Parks.

Damage and Ways to Discourage Deer