Raccoons are naturally found in South Dakota. They live in all kinds of environments, but prefer to live near water and wooded areas. In Sioux Falls, they are commonly found in backyards near cattail drainages, wooded draws, and the Big Sioux River. They will also live underneath decks, in attics or chimneys, or under trailer houses. Raccoons eat both plants and animals, but in the city they will also feed on garbage, cat food, and bird food. Baby raccoons are primarily born in April or May, and they stay with their mother for the first year of their life. Raccoons are active all year long. Raccoons are classified as furbearers in South Dakota, but by law they cannot be trapped in Sioux Falls except by Animal Control personnel. 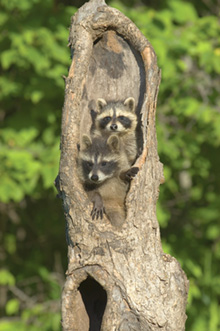 Raccoons can carry a disease called rabies, which if not treated right away can lead to death. They also commonly carry distemper and roundworms, which can be passed on to you and your pet. People or pets that are bitten by a raccoon should go to the doctor or veterinarian right away to be treated. If a bite occurs in Sioux Falls, call Animal Control at 367-7000. We will respond to the scene and try to capture the raccoon for rabies testing.

Damage and Ways to Discourage Raccoons

Raccoons can cause damage to buildings, gardens, turf and koi ponds. Unfortunately, if you live near a grassy waterway or wooded ravine, you will likely have a re-occurring raccoon issue. Some techniques for dealing with raccoons in your yard are: