Police work is something that most people find very interesting. Television, movies, books and the media often cover police related stories, dramatizing the work done each day by the men and women in uniform. Quite naturally this piques the interest of the citizens of Sioux Falls as to what their Police Department does. The CPA is designed to help answer those questions.

CPA is intended to build bridges and relationships between our citizens and the Police Department. Often police and citizens have complex relationship. Citizens often believe that they see police not doing their job or exceeding their boundaries. CPA provides citizens a firsthand look at what rules, regulations and policies the police follow. It also shows them and allows them to do some of the training that their officers go through in order to wear the police uniform. In this way, some of the misunderstanding may be alleviated. CPA is not trying to train citizens into a reserve police force, but merely to build relationships with the community and to dispel any myths they may hold. 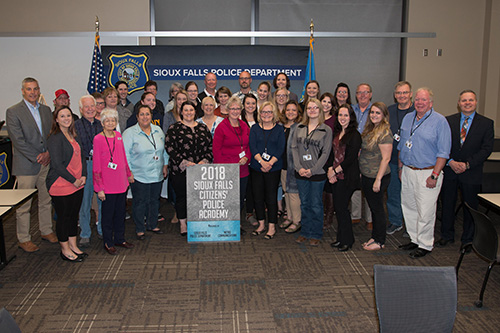