Investing in the Next Generation of Drivers

The focus of the school day was on the letter T for “transportation,” and on Friday, March 6, two preschool classes at Holy Spirit Elementary School in southeast Sioux Falls learned straight from the source about everything from traffic signals to traffic signs.

Matt Rock, Traffic Engineering Technician with the Public Works Department, shared information about his position and traffic control across the city to the preschool students, including his daughter Evie, 5.

This is the fourth time Rock has given a presentation about traffic at Holy Spirit Elementary School — once last year during Evie’s first year of preschool and also during his youngest son’s tenure at the school.

It’s a way for the City of Sioux Falls to help educate the future generation of drivers, Rock said.

“I thought it was great that our students get a firsthand look at some of the signs and signals that are used on the roadways around our city,” said principal Regan Manning. “Most kids learn and retain information better when they are able to make connections to real-life experiences. Today was a great example of how the City of Sioux Falls is committed to investing in the education of the kids of our city and providing these real experiences with the children of our community.”

“We want traffic to flow in the city and be safe. Do you know why that’s important?” Rock asked the students.

“So we don’t crash!” one student chimed in.

Rock discussed safety components of the equipment, such as the stop signs having reflectivity, along with how the City manages more than 38,000 signs. “That’s a lot of signs!” a few students remarked.

Many students were surprised by the sheer size of the traffic signals, which are much larger than they initially appear when you drive underneath them on the street. Rock worked to make the material relatable to the students. 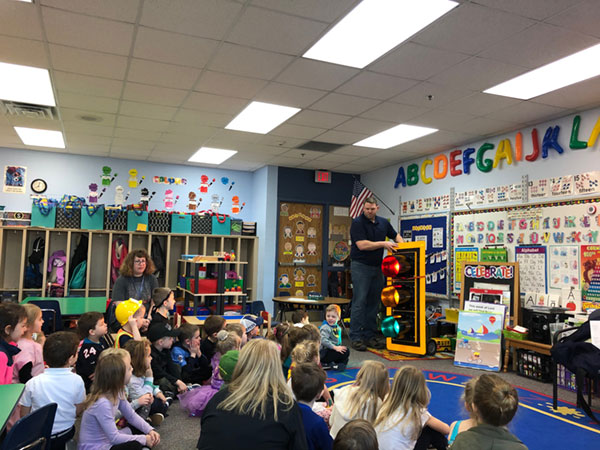 “The traffic signal lights are each about the size of a frozen pizza. You can share that knowledge with your siblings and parents at home,” he told the students.

Preschool teacher Diane Laycock said the discussion has been a success, and she’s been happy to welcome Rock back. “It’s helped them to learn about traffic and environmental signs” and to meet required learning standards, she said.

Thanks to Rock, students left the presentation with more knowledge about traffic signs and safety.