The Native Prairie Project (NPP) aims to create spaces for native vegetation and intends to improve water and air quality, beautify the landscape, reduce erosion, and provide habitat for native wildlife. This project began as an internal effort, but the City will continue to reach out for support from our partners such as the Minnehaha County Conservation District, Lincoln County Conservation District, South Dakota Department of Environment and Natural Resources, South Dakota Game, Fish & Parks, and Friends of the Big Sioux River. The City established a pilot native prairie buffer strip on a four-acre site in Yankton Trail Park near the intersection of 57th Street and Western Avenue in 2015.

The City of Sioux Falls has implemented two additional native prairie buffer strips—in highly visible locations in parks near the bike trail and the Big Sioux River—in Dunham Park and Legacy Park in Sioux Falls. Because of the amount of traffic seen at both of these locations, two educational signs (see example below) will be installed at each native prairie buffer strip location to inform the public about the project and the important role it plays in preserving the quality of our water sources.

These signs visually illustrate what stormwater runoff is and how buffer strips help to protect our waterways through native plant root structure examples. This provides an overview example of what residents should look for at other buffer strip locations throughout town in order to identify them as part of the larger project. These prairie sites and signs will also serve to educate visitors about the history and ecology of the area. 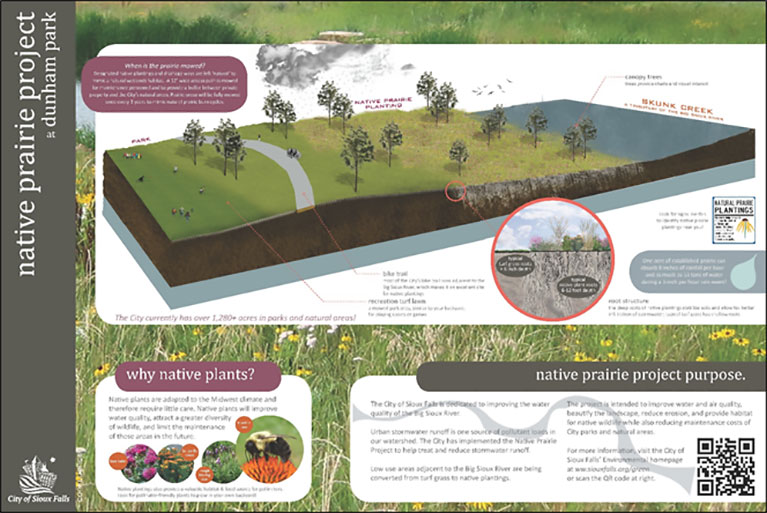 The NPP sites will benefit the community in numerous ways. They serve as a filter to remove sediment, nutrients, pesticides, and other pollutants from stormwater runoff before it enters the Big Sioux River. Once established, the buffer strips will also work to stabilize the river bank to help reduce stormwater runoff and erosion. Native plants have roots that grow very long and deep into the ground which allow them do a better job of stabilizing soils and allowing infiltration of stormwater than the shallow-rooted grasses that are currently found in abundance in most yards and parks. Native vegetation improves water quality, creates a habitat beneficial for a variety of species including pollinators, attracts a greater diversity of wildlife, and limits the maintenance of these areas needed in the future. 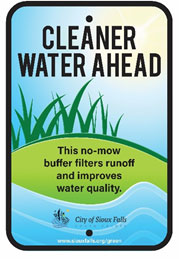 In coordination with the NPP, No-Mow Buffers have been established. A No-Mow Buffer is a designated area where vegetation is permitted to develop with restricted mowing. Allowing the grass to grow high and limiting regular mowing has numerous environmental and economic benefits. No-Mow Buffers help vegetation’s ability to produce energy and prevent vegetation from becoming stressed in summer heat. These areas reduce the time, energy, and resources spent to regularly mow the area. They save the City costs and minimize air and noise pollution. In addition, these help reduce the amount of pesticides, spilled oil and gas, and yard clippings that make their way to the storm drains and pollute the Big Sioux River.

No-Mow Buffers can be found in Paisley Park, Nelson Park, Cherry Park, Tuthill Park, and Legacy Park. Keep an eye out for the No-Mow Buffer signs!