The water reclamation facility is designed to treat all the domestic, industrial and commercial wastes for the City of Sioux Falls and some nearby communities. The primary reason we treat wastewater is to remove and stabilize organic waste from houses and business to prevent wastewater pollution in the Big Sioux River. Currently the City of Sioux Falls Water Reclamation Facility treats almost 32,000 pounds of organic material daily. We remove almost 99 % of all pollutants that flow into the treatment facility before the water is discharged into the Big Sioux River. 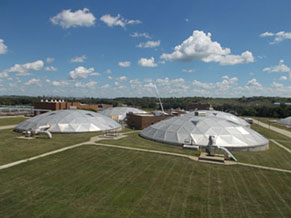 The treatment requirements for the Water Reclamation Facility are set by the South Dakota Department of Environmental and Natural Resources (DENR). The SD DENR issues all wastewater treatment plants a Surface Water Discharge Permit. The Permit is a legal document that lists the limits all water must meet before being discharged into the Big Sioux River.

On the following pages is a written summary that explains each treatment process. 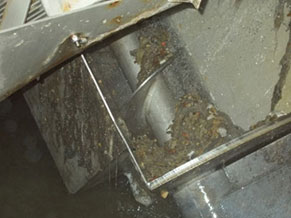 The cleaning of all wastewater begins in the headworks area. The headworks area consists of: three bar screens, grit classifier, and grit chamber tank. The water first passes through the bar screens that filter out objects that are capable of damaging the treatment plant equipment. These objects usually include rocks, sticks, rags, toothbrushes, and combs these objects are screened out and then sent on to the landfill, for final disposal. 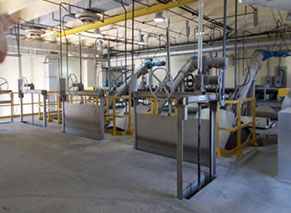 Now the organic solids that settled to the bottom of the primary tanks are pumped to a gravity thickener. The water that leaves the primary settling tanks continues onto the next step, which is the Trickling Filters. 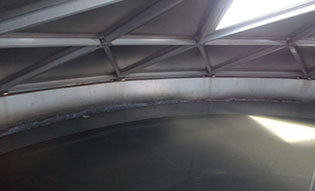 Sioux Falls Water Reclamation Facility has 4 digesters; three of the digesters are called “Primary Digesters” and the 4th digester is called the “Secondary Digester”. After the organic solids have been thickened in the gravity thickener they are pumped into one of three primary digesters. In the primary digesters, 3 things start to happen: 1) the solids are transformed into a more basic form of nutrients (food). 2) Anaerobic bacteria (anaerobic bacteria are bacteria that do not use oxygen) and facultative bacteria (facultative bacteria are bacteria that can live with or without oxygen). These bacteria are very hungry and immediately start to eat the nutrients that are pumped in from the gravity thickener. As these bacteria digest the nutrients they have now begun the “biological stabilization” process. That means that these bacteria are eating raw solids and it is becoming part of the bacteria cell structure and additionally the bacteria are producing a lot of acid. 3) In the third stage, the acid is consumed by other bacteria that use the acid to make methane and carbon dioxide gas.

All of these bacteria work much like the bacteria in our stomachs. They like the temperature to be about 98 degrees, stable amount of food every day, and the same things that can make a person sick, can also upset the digester microbiology; poisons, fuels, solvents, herbicides, etc. If these bacteria are adversely affected by the changes listed above, it can adversely impact the performance of the digesters, which will directly affect the digestion process of the waste inside the digesters. To prevent adverse conditions from happening, the Water Reclamation Lab staff performs regular tests on the digesters, to monitor the volatile acids, alkalinity, pH, total solids and total volatile solids in the digester. If adverse trends are detected from the lab tests then the wastewater operators will make appropriate changes to the digester operations.

The digestion process takes about 20 days to accomplish, when it’s done, the solids are now considered biosolids and can be applied to farm fields and enhance the soil nutrients for improved crop yields.

There are three electrical generators at the Water Reclamation Facility that use biogas to produce electricity. Biogas is the methane gas that is produced by the bacteria that anaerobically stabilize the organic material in the digester units. On a typical day, the anaerobic bacteria can produce upwards of 240,000 cubic feet of methane gas. 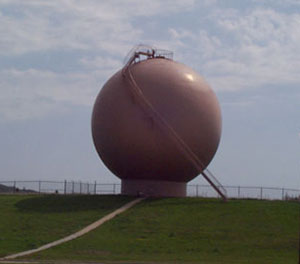 The methane gas is used as a fuel to run gas engines that spin the generators and produce electricity. The amount of electricity produced is dependent on how many cubic feet of biogas is produced each day and typically we generate from 38% to almost 60% of the daily electricity needed to operate the treatment facility. That means on a typical day, the generators will produce 10,000 to 18,000 KW’s per day and assuming an average home uses 29 KW each day we produce enough electricity to power 620 homes a day. 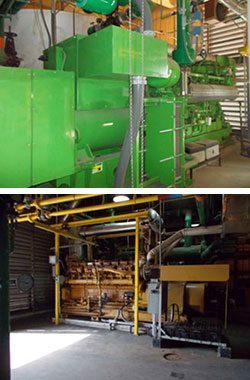 In the near future, the Water Reclamation Facility will install a new Fats, Oils, and Grease (FOG) facility to receive FOG and food waste that will be directly fed into the digesters. The FOG is a high gas producing material, which the bacteria in the digester consume and produce high quantities of methane gas as a byproduct in the stabilization process. Our engineering estimates indicate a potential to generate upwards of 80% of our daily electrical needs to operate the Water Reclamation Facility, from the additional quantities of biogas production. 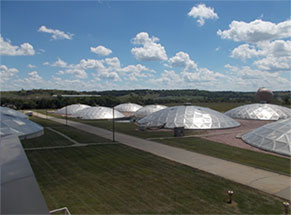 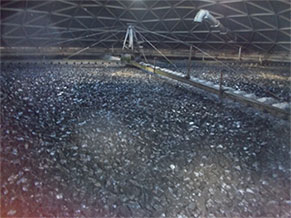 The activated sludge system is designed to convert the ammonia into nitrates. After the wastewater leaves the two stage trickling filter system and the intermediate clarifiers any remaining organic material and ammonia left in the wastewater must be stabilized even further, and ammonia must be converted into nitrite.

The ammonia must be removed from the wastewater for two reasons:
• Ammonia is toxic to aquatic life in the Big Sioux River. The ammonia creates a huge oxygen demand in the River, for every pound of ammonia discharged into the Big Sioux River, requires 4.6 pounds of oxygen to stabilize into nitrate nitrogen. This would consume a lot of oxygen in the River that is needed by the fish and other aquatic life found swimming in the river.
• The Surface Water Discharge Permit issued by the State of South Dakota Department of Environment and Natural Resources, limits the amount of ammonia that can be discharged into the Big Sioux River.

The ammonia is converted to nitrates using a two-step biological process:

Once the ammonia is converted into the nitrate form, it is no longer toxic to aquatic wild life living in the Big Sioux River.

The organic material that is left over from the trickling filters that still needs to be removed is accomplished by using other bacteria that are populating the activated sludge system.

All of these bacteria require a lot of oxygen to accomplish these tasks of wastewater treatment. The water reclamation facility has four large mechanical blowers that can produce up to 15,520 cubic feet of air per minute, to supply all of the oxygen these bacteria need for the nitrification process and removal of the remaining organic material. On a typical day, only one blower is used to supply an adequate amount of oxygen to the activated sludge bacteria and occasionally a second blower is put in service if the organic loading on the plant increases for a sustained period of time. 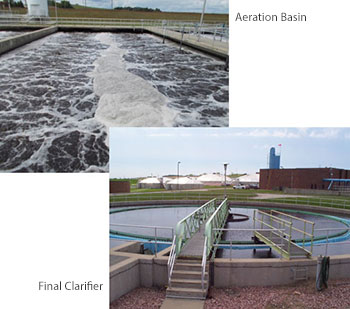 The water reclamation facility has 6 aeration basins and each basin can hold up to 1,361,225 million gallons each and normally only 3 aeration basins are in service. The aeration basins house the activated sludge bacteria and are where all of the nitrification work and organic material removal is done.

There are also 4 final clarifiers that allow the activated sludge to settle out of the water, before the water proceeds to the effluent filters. Each final clarifier can hold 822,500 gallons of water. 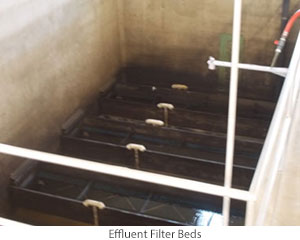 After the water is finished with the activated sludge treatment process, it leaves the final clarifiers and flows into 8 effluent filters that use anthracite to remove the majority of any suspended solids, which are small organic particles still in the wastewater.

The water flows through a bed of anthracite filter media that acts like a strainer and the media is about 36 inches deep. A large portion of suspended solids are captured in the anthracite media and the clean water then flows onto the disinfection process. 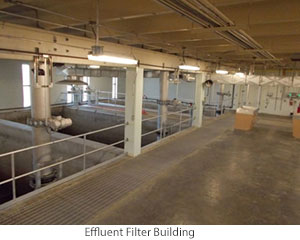 As the water flows through the anthracite media, more and more suspended solids are captured in the media and those suspended solids must be removed on a regular basis, so the filters will not become plugged. The filters have a computer system that automatically determines when the filters need to be cleaned and this computer will initiate a filter cleaning process. Each filter can operate up to 48 hours, before a cleaning cycle needs to be performed. On some occasions, the filters can go as long as 72 hours, before being cleaned. After the water has been filtered, 98% of the wastewater pollutants have been removed. 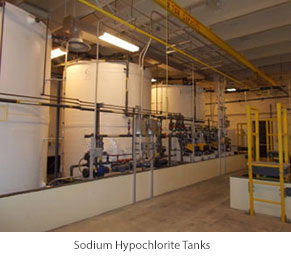 After the water has been filtered in the effluent filters the next process is disinfection. The filtered water enters the chlorine contact chamber where sodium hypochlorite (Bleach) is added to disinfect the targeted bacteria and the targeted bacteria is fecal coliform. The Water Reclamation facility uses Sodium Hypochlorite, which is a very strong bleach solution at 12.5% strength; typical household bleach is usually 2% in strength. The Surface Water Discharge Permit mandates our daily average fecal coliform count must be less than 200 fecal colonies per 100 milliliters of sample collected. 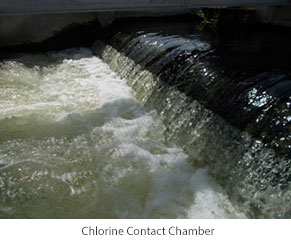 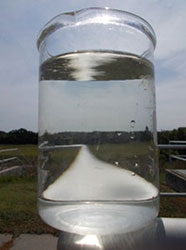 The Sodium Hypochlorite is hazardous to aquatic life and as the water leaves the chlorine contact chamber, it is dosed with a chemical called Sodium Bisulfite to remove any remaining bleach residual. This is referred to as the de-chlorination process and ensures the water leaving the disinfection process is completely safe to all aquatic life inhabiting the Big Sioux River. 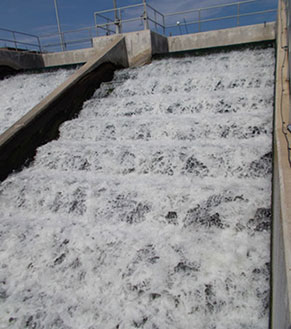 The final treatment process is Post Aeration and is a process of adding dissolved oxygen into the water, just before the treated water enters the Big Sioux River. The post aeration process “freshens” up the water making it even more hospitable for aquatic wildlife. The aeration process is done by letting all the water flow over a series of concrete steps that cause a splashing action that aerates the water as it bounces down the steps and is finally discharged into the Big Sioux River.

The Surface Water Discharge Permit sets a minimum limit of 5.0 mg/L of dissolved oxygen that must be in the water, before being discharged into the Big Sioux River. The post aeration process typically raises the dissolved oxygen level up to 10 mg/L.

The Sioux Falls Water Reclamation Facility has an onsite laboratory that performs many analyses on samples collected throughout the treatment process. These analyses are used to determine the organic loading on the plant and can be used to diagnose and trend any adverse treatment anomalies as they occur. The laboratory data is formally submitted to the South Dakota Department of Environment and Natural Resources on a monthly basis to verify that the plant is performing in compliance with the Surface Water Discharge Permit.

The laboratory team will also collect samples from local industrial dischargers, to determine their loading impacts on the Water Reclamation Facility.

Other tests are collected at various locations along the Big Sioux River to determine the condition of the water after storm events, or to set up profiles of various parameters like; E.coli, total suspended solids, biochemical oxygen demand tests, and ammonia levels.